In 1785, the Congress of the Confederation passed the Land Ordnance of 1785 in an effort to sell lands acquired through treaty or were relinquished by individual states in return for other concessions. (Remember your history here – the Constitutional Convention didn’t meet until 1787, and before that the states operated under a loose confederation with a weak, barely functioning central government.) In 1785 the federal government was about broke, was facing crushing debt and needed to do something fast to generate cash. The only resource they had was land – lots of land. It was a happy coincidence that settlers needed land – lots of land. The growing nation was spilling over the Appalachians and into the the new regions of the ‘Northwest Territories’ – today’s Western Pennsylvania, Ohio, Indiana, Illinois, Michigan, Wisconsin and Minnesota. Most were squatters, occupying land they didn’t have title to. Heck, nobody had clear title to the land because it hadn’t been mapped, surveyed and divided into salable parcels or lots. Not even Congress clearly understood what they had.

This is where the Land Ordnance of 1785 came in. The Ordnance established the mechanism by which the land was to be surveyed and divided into logical parcels that made for easy identification and sale. Known as the Public Land Survey System (PLSS), it established the township & range survey system that started on the western bank of the Ohio River in 1785 and ended up extending all the way to the Pacific Ocean. In September 1785 surveyor Thomas Hutchins walked down to the bank of the Ohio River opposite Georgetown, Pennsylvania, drove a stake in the ground and established the origin point, or point of beginning, for the survey system that would end up defining the geographic fabric of a nation. Hutchins moved west into the Ohio territory on to lay out the first township & range sections in what is known as the Seven Ranges survey. 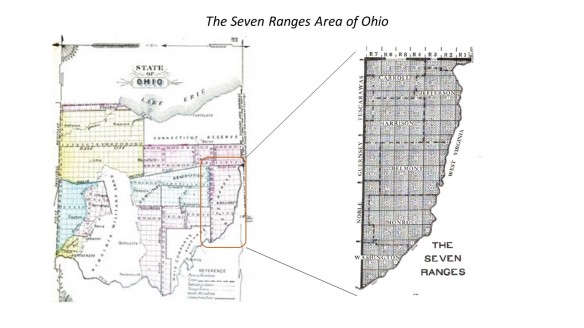 To facilitate the sale of this land Congress established the General Land Office (GLO) in 1812. For over 120 years the GLO managed the sale or transfer of public lands to millions of homesteaders, farmers, ranchers and commercial interests. The GLO conducted or oversaw the largest public land survey program in history, and its achievement remains unmatched today. Modern surveyors still refer to original GLO survey records because they are, in a very real sense, the foundational documents for much of this country.

In 1946 the GLO was merged with another federal agency to become the Bureau of Land Management (BLM). In the mid-1980s the BLM made a series of short films discussing its history. Below is an informative piece from that series discussing the development and use of the township & range survey system. Enjoy!