The Brunton pocket transit is a particular interest of mine. Since my days as a geology student, taking strike and dip readings across the southwest US to my days as a topographer in the Army Corps of Engineers I’ve always found the pocket transit a marvel of ingenious, compact technology. I am rarely afield without one. 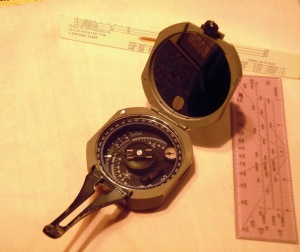 For more information on the Brunton pocket transit be sure to visit the Pocket Transit Resource Page. But first, a little background on this neat little instrument… 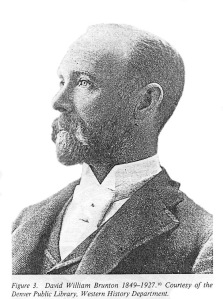 The pocket transit was developed and patented by David Brunton in 1894. Brunton, a noted mining engineer working in Colorado, recognized the need for a small, accurate, multi-purpose instrument suited for field exploration and mineral mapping. In his original patent application Brunton noted that the instrument can be easily carried in a vest pocket, hence the name ‘pocket transit’. 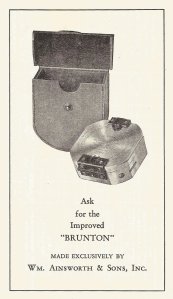 What makes the pocket transit so useful is the integration of a number of different instruments into a single, easy to carry package. The Brunton pocket transit incorporates a highly accurate mirror compass, level and clinometer that reads in both degrees and percent of slope. The pocket transit also incorporates a sight vane that improves the accuracy of handheld readings and forms a longer sight baseline when the instrument is mounted on a tripod for more accuracy. This makes for an incredibly versatile instrument. 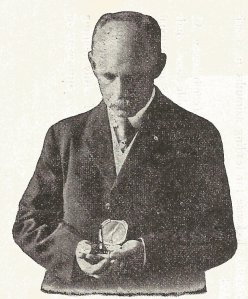 Here we see David Brunton himself demonstrating how to hold the compass at waist level for shooting an azimuth. 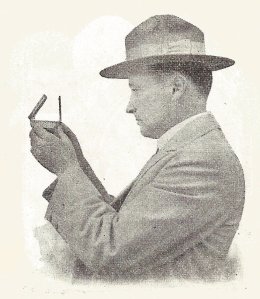 The pocket transit being used as a mirror compass 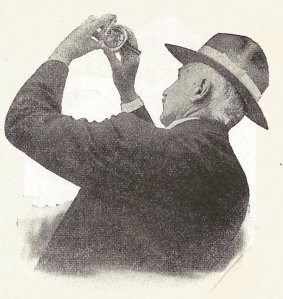 Here again we see David Brunton demonstrating how to use the clinometer feature in the pocket transit.

What added to the versatility of the pocket transit was the ability to clamp the instrument to a tripod to increase its stability. 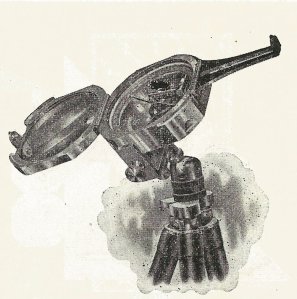 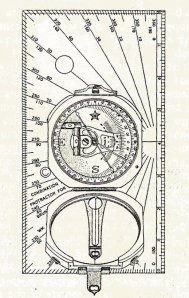 Brunton even manufactured a clear acetate protractor allowing the pocket transit to be used as a plane table alidade.

Now let’s look more in-depth at the history of the pocket transit:

The Brunton pocket transit was patented in 1894 by David Brunton, a Colorado mining engineer. Brunton was frustrated by the number of survey instruments a mining engineer and geologist had to carry around with him (and I say ‘him’ because mining engineering and field geology was an exclusively male profession well into the 20th Century). In the late 1800s it was not unusual for engineers and geologists doing basic exploratory mineral mapping to lug around full sized survey transits, surveying compasses, tripods, clinometers, and plane tables. These instruments offered a high level of accuracy that simply wasn’t needed for exploratory surveys. As an engineer himself Brunton realized that what was needed a portable device that allowed field survey personnel to do fast and accurate exploratory quality surveys without being burdened down by equipment that was heavy, expensive and difficult to set up and use. These men were in the business of discovering, verifying and mapping mineral deposits that covered vast areas. Huge sums of money were at stake as mining and mineral companies scrambled to secure valuable leases on the stuff that was fueling America’s exploding industrial economy – timber, gold, silver, coal, iron ore, chromium, nickel, bauxite, petroleum and dozens of other minerals that were key to America’s growth.  Field engineers and geologists needed to move fast, do rough mapping and get that information back to the office for the development of lease maps and boundary descriptions.  They didn’t need to be burdened with heavy, sensitive and fragile survey gear if that level of accuracy wasn’t required. David Brunton recognized the problem and set to work developing a solution.

What Brunton came up with as a pocket-sized device that incorporated an accurate magnetic compass with a sighting vane, a clinometer, a level and a large mirror with a sight line. Housed in a machined aluminum case (still an expensive material in the late 1800s), it was rugged, reliable and useful.

Brunton named his instrument the ‘pocket transit’, a lofty title for a fairly rudimentary mapping device. But the name served its intended purpose; in the mind of the engineer and geologist it set the device apart from the common handheld compass. Here was a professional instrument that offered a level of accuracy and functionality not found elsewhere.

Brunton had more than marketing on his side. The pocket transit actually delivered where it mattered – in the field and in the hands of engineers and geologists across North America. It delivered all the functionality and accuracy needed to get the job done.  It ended up being the perfect device for the job at hand.

Demand for Brunton’s device increased steadily and improvements were introduced. An additional bubble level and a cover mounted peep sight were added in 1912. In the same year Brunton introduced modifications to the case that allowed mounting the instrument on a non-magnetic tripod or jacobs staff. (It’s interesting that in his 1894 patent application Brunton derided other compass designs that needed to be tripod mounted, but in the 1912 patent application he discusses tripod mounting like it’s the greatest idea since sliced bread.) Somewhere between 1894 and 1912 the pocket transit acquired the ability to pre-set magnetic declination by use of an adjustment screw on the side of the case. By 1926 Brunton’s design had fully matured with the addition of a bullseye level for improved leveling and the addition a percent grade scale to the clinometer.  From this point forward it was minor improvements in materials, manufacturing techniques and the added availability of different compass ring layouts (degrees, quadrants, mils, etc.). 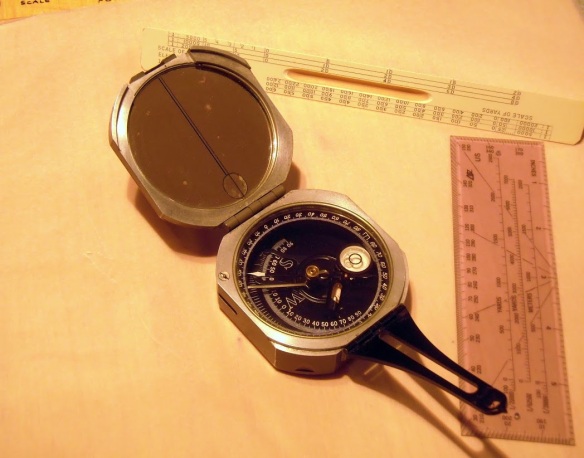 A pocket transit set out in quadrants

From the beginning David Brunton licensed the Colorado instrument maker William Ainsworth & Sons to produce the pocket transit. After Brunton’s death in 1927 Ainsworth purchased the manufacturing rights to Brunton’s designs and continued manufacturing and improving the pocket transit through the late 1960s. In 1972 the production rights and the Brunton name were purchased by the Brunton Company of Riverton, Wyoming. The Brunton Company continues to manufacture this basic design. 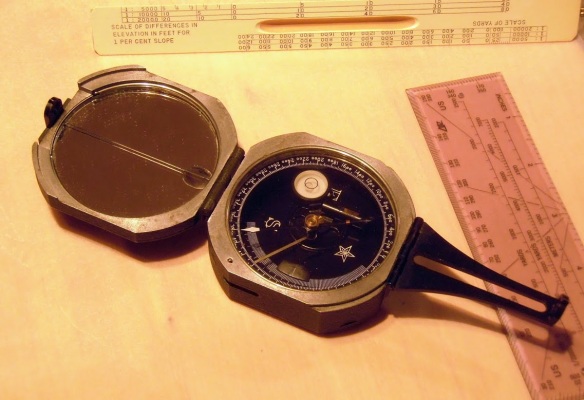 The Brunton design was so well thought out that engineers and geologists quickly developed field techniques keyed to the pocket transit’s unique layout and construction. The best example is the determination of the strike and dip of rock formations. Most sedimentary and metamorphic rock formations are not horizontal. They were all deposited in horizontal layers but over geological time (i.e., millions of years) those horizontal layers have been warped and deformed by pressure and other geological forces. One of the keys to understanding these forces is mapping the strike (the horizontal angle of deformity) and dip (the vertical angle of deformity) of individual rock layers. Before the Brunton pocket transit the measurement of strike and dip was a clumsy process involving two separate devices – a field compass (often a fairly large and somewhat fragile device) and a clinometer. With the Brunton the process is quick and simple – open the instrument and lay it horizontally against the rock formation. Keeping the edge of the instrument in contact with the rock face rotate it up and down slightly until the circular level is centered. Note the magnetic azimuth as indicated by the compass needle. That is your strike. Score a line on the rock face horizontal to the pocket transit using a piece of chalk or small piece of rock and remove the pocket transit. Make another score mark that is perpendicular to the horizontal mark you just made (your mark should look like a ‘T’).  Place the pocket transit along this perpendicular mark and measure the angle of slope using the built in clinometer. This is your dip. It takes longer to describe than it does to do it in the field. This is the standard measurement technique for strike and dip, and every college and university geology department in North America teaches it as part of their field geology curriculum.

My introduction to the pocket transit came in the mid-1970s while studying geology in college. We learned strike and dip measurement techniques early on in the field methods class, and later during our summer field geology course we ranged across the southwestern United States, making thousands of strike and dip measurements in an effort to understand the geologic processes that formed the unique landscape of that region. I saw the pocket transit as a useful but fairly limited device, suited only to the field geologist. Years later while attending a course at the Defense Mapping School at Fort Belvior, Virginia, our class got an intensive block of instruction on the use of the pocket transit not just for strike and dip measurement but for height determination, precise azimuth determination, basic plane table survey work and rough site layout. I finally saw the full potential of the pocket transit and purchased my first one soon after. That pocket transit has seen service in Kuwait, Honduras, Panama, Germany, Bosnia, Korea and across the US. It has been a constant companion on hundreds of field surveys, assisting with tasks like mapping out refugee camps on the Empire Range area of the Panama Canal Zone, measuring road grades along the Pan-American Highway in Honduras and fixing North Korean observation point locations along the Korean DMZ. 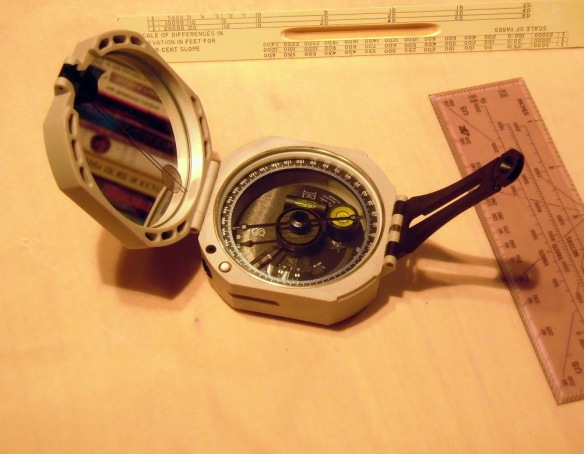 The Brunton pocket transit doesn’t measure horizontal angles as well as a conventional transit, it doesn’t measure vertical angles angles as well as a theodolite, sextant or even an Abney hand level. If you need to shoot azimuths using handheld techniques the Army lensatic compass is a better tool. However, the pocket transit does all of these tasks well enough, and puts everything needed into a compact, easy to carry package that really does fit into your pocket. (In his patent application David Brunton noted that the instrument fits nicely into a vest pocket – therefore the name pocket transit).

46 thoughts on “The Brunton Pocket Transit”