Since the late 1930’s the stereoscope has been a fundamental tool of the professional topographer. The stereoscope entered use as more and more stereo aerial photography became available from private aerial survey companies and federal agencies like the Department of Agriculture, the Soil Conservation Service, the Tennessee Valley Authority, the US Geological Survey and the US Army Air Force.

On this page we’ll look at a variety of stereoscopes by type and discuss some of the good and bad points of each design.

Be sure to check out the Stereoscope Resources page for examples of user manuals and other interesting documents related to stereoscopes and their use.

You can see many of these stereoscope designs in use in this great old USGS film titled ‘Introduction To Photo Interpretation’:

So let’s have a look!

The pocket stereoscope – or refraction stereoscope – is by far the most common type seen today. The basic design dates back to the late 1930s when the US Army was looking for a simple, rugged design that could be issued en mass to units who were starting to make use of the new stereo aerial photography that was becoming widely available.

During WWII they were manufactured in the thousands and saw use by all services in all corners of the globe. Most were manufactured using a simple pot-metal (zinc?) frame, wire legs and 2-power (2x) lenses. The basic design was manufactured for the US military right up through the 1990’s but their use seems to have greatly declined with the military’s abandonment of hard-copy stereo photography for digital display systems.

Some notes on the models seen above:

#2 – SRA. This is an example of an inexpensive type of stereoscope commonly referred to as a ‘student’ stereoscope. The lenses and frame are a single piece of molded acrylic. Simple, effective and cheap. You can buy this style, in bulk, for a few dollars each from a number of on-line vendors.

#3 – Abrams Instrument Company. Abrams Instrument was a subsidiary of the Abrams Aerial Survey Compay of Lansigng, MI. Ted Abrams was a pioneer in the aerial survey field and much of the equipment he designed and techniques he developed found their way into military use during WWII and after. Abrams’ CF-series of pocket stereoscopes appear to be the most widely produced models and are very common on the used market today.

#4 – Laser Sciences, Inc. Type I. This company seems to be a late-comer to the stereoscope field. Most models I’ve seen appear to have been manufactured in the post-Vietnam War era. A simple design of very good quality.

#5 – Fairchild Camera and Instrument Corp. Model F271. Fairchild was another pioneer in the aerial survey field and the company was a primary supplier of aerial camera systems to the US military from WWII on through Vietnam. While Fairchild made very good cameras this stereoscope is something of a turkey. Unnecessarily complex, overly heavy, difficult to adjust, surprisingly delicate for it’s weight and perhaps worst of all, the tri-leg design easily scratches the emulsion on aerial photos. This stereoscope is somewhat rare, probably for good reason. I’m betting most got tossed in the trash can in favor of the simpler and easier to use designs like the Abrams CF-series.

Variable power stereoscopes are a step up from the 2-power (2x) folding pocket stereoscopes in terms of build quality and features. These stereoscopes were generally offered in two power levels – 2x and 4x.

Manufacturers achieved this ‘variability’ in magnifying power in one of two ways. Some manufacturers, like Abrams, incorporate a supplemental optics set that snap into place below the 2x optics to double the magnification. Other manufacturers like Felsenthal took a simpler approach and just placed 2x and 4x optics on each side of the stereoscope frame. Both approaches work equally well, although the Abrams approach provides a more compact design. You can’t really ‘focus’ the optics on either of these designs. The manufacturers take a simpler approach by providing adjustable legs that can be widened or ‘splayed’ to drop the body of the stereoscope closer to the aerial photo to bring it into focus in the 4x mode.

The Abrams CB-1 variable power stereoscope shown with the Abrams HF-2 height finder.  The CB-1 is a plastic body stereoscope with secondary optics that swing into place below the main optics to achieve a 4x magnification. The HF-2 height finder snaps into the legs of stereoscope and allows the analyst to measure feature displacement (in millimeters) to calculate feature heights. Click here to view the CB-1 instruction sheet 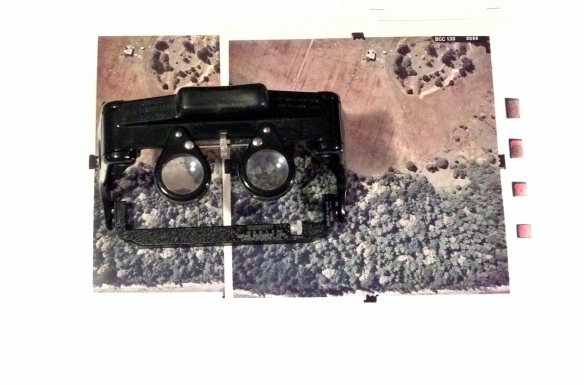 The Abrams CB-1 in 4x configuration. The supplemental optics have been swung into place and the legs splayed to drop the stereoscope closer to the aerial photos to bring them into focus

The Felsenthal ‘Stereoscope, Combination, 2x & 4x’. This all-metal design takes a different approach to the variable power issue. The manufacturer simply placed a set of 2x optics on one side of the frame and a 4x set on the other. Simple and effective 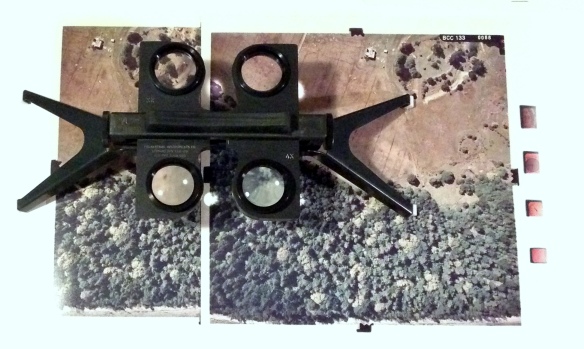 The Felsenthal variable power stereoscope in the 4x configuration. You simply turn the stereoscope around to bring the 4x optics into your line of vision and splay the legs to focus

Mirror stereoscopes – also known as reflection stereoscopes – are the big guns of the stereoscope world – they are what you pull out when you have to analyze large areas of terrain or need to make precise measurements of features visible in stereo photos, or just need a more comfortable viewing environment to review and study large large numbers of stereo photos. Mirror stereoscopes all follow the same basic design – a wide stance frame that holds a set of mirrors in precise alignment to reflect the aerial images and bring them to a set of objective lenses of varying magnification for viewing.

Mirror stereoscopes run the gamut from relatively inexpensive plastic models for student use to units costing tens of thousands of dollars that are mated to computers to derive coordinates for precise positioning and military targeting. The better examples in this category boast world-class optics, expensive first surface mirrors and highly precise light paths for minimal image distortion. Many of the top optical instrument makers – Wild, Zeiss Oberkochen and Zeiss Jena, Bausch & Lomb, Kern, Nikon, Sokkisha, Topcon, Leitz, Fairchild, Abrams, Hilger & Watts, Meopta and others – all made mirror stereoscopes at one time or another. Let’s have a look at some examples:

Sokkisha MS16 stereoscope laid on its side to show the mirror bridge assembly. This is a compact and narrow mirror assembly and still requires most aerial images to be overlapped to establish a proper stereo view 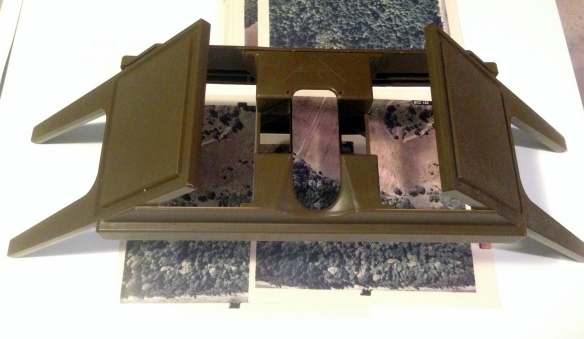 An all-plastic mirror stereoscope called the Geoscope and sold by Stereo Aids out of Australia. While it is a lighweight (and somewhat flimsy) student stereoscope it offers a surprisingly wide and bright field of view. This stereoscope is about as simple of a design as you can imagine. It has no optics or ocular assemblies, just four sets of mirrors. The big drawback is that this stereoscope offers no magnification. Still, an interesting design and one that works well

Fairchild F-71 mirror stereoscope. This model represents a common design that was produced by the thousands for the US mlitary during WWII by Fairchild, Abrams, Alan Gordon, Q.O.S. and others. Production continued post-war and some were manufactured in Japan for companies like Air Photo Supply. These stereoscopes found wide use in other federal agencies like the USGS, NOAA, USDA and US Forest Service, and many found their way into service with colleges, universities and private industry. The F-71 type is a simple, sturdy design that offers 2x magnification without the binocular head, and 4x with it in-place. Click here to view the F-71 instruction manual. 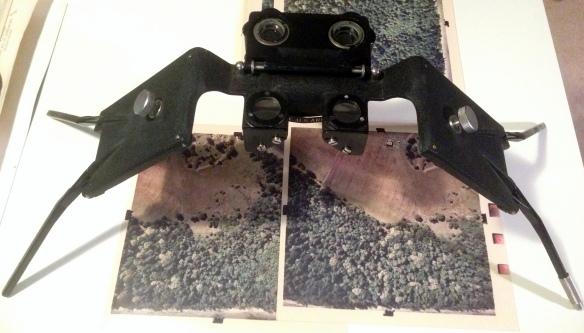 The Fairchild F-71 with the binocular optical head in the up position. In this configuration the stereoscope provides 2x magnification 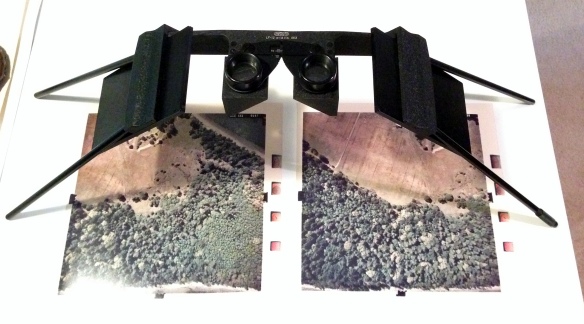 Meopta LF-12 mirror stereoscope made for the Czechosovakian army in what is now the Czech Republic. This is a relatively standard design offering 2x magnification. Meopta is the premiere optical manufacturing firm in the Czech Republic (and earlier, Czechoslovakia) and makes a wide variety of optical instruments. A large number of these stereoscopes have appeared for sale in the US in the last 10 years, probably due to the Czech government clearing out Cold War-era surplus military equipment

The Ryker M-11 is an odd duck; over designed, beautifully made and, when compared to the successful design of the Fairchild F-71, overly complex and not well suited to the task of giving Soldiers operating near the front lines of WWII a rugged, easy to use stereoscope. This is something Rube Goldberg would be proud of. It is an open bridge design that uses a tripod stand to support the mirror and optical assembly. At first it looks like a great idea until you try to slide a pair of stereo images under the mirrors. You quickly learn that the center support leg sits right where the images should be overlapping. The optical power can be increased by dropping the separate lenses into the optical bridge or you can use the separate binocular magnifier assembly

The Ryker M-11 shown on it’s back. You actually focus the thing by sliding it up and down on the vertical support rail 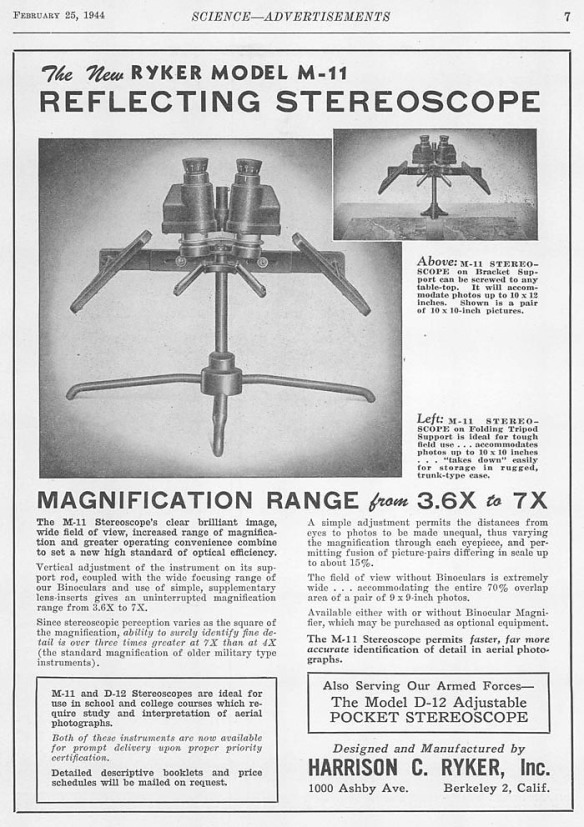 1944 ad for Ryker stereoscopes. Today both the M-11 and the D-12 pocket stereoscope mentioned in the ad are fairly rare

This particular Ryker stereoscope was originally delivered to the US Marine Corps but eventually found its way to the University of North Carolina – Chapel Hill where I picked it up as a surplus item back in the ’90’s. It is unusual to find a general issue military stereoscope with a serial number

This is a catch-all category for those stereoscope designs that don’t fit any previous category.

Meopta LF-11 binocular stereoscope. While this design is fairly unusual I believe similar designs were produced in the US post-WWII. The overall design of this stereoscope is fairly simple – an optical head built using classic binocular porro-prism design that mounts to, and can slide laterally along, a tubular steel frame. Because of the extremely wide frame I suspect this stereoscope was designed for viewing stereo image triplet sets