I’m a big Android fan and have been for about two years.

For almost eight years I’ve used Apple’s iOS mobile devices at work and at home. I understand and respect the high level of software and hardware integration that Apple brings to its ‘ecosystem’. It makes managing and troubleshooting the devices dead simple, particularly if, like me, you serve as tech support for a large pool of family and friends, many of whom live hundreds of miles away.

A number of years ago, on a whim, I picked up a Samsung Galaxy Player 5. This now defunct product was Samsung’s answer to the iPod Touch. It was (and still is) a great idea – a phone-sized tablet that offered everything except the phone. It ran an early version of Android 2.x (Gingerbread). I found the hardware compelling but the Android operating system somewhat limited, particularly when contrasted against the then current version of iOS.  I concluded at the time that the Apple devices were just the better option and I pushed my family and my employer towards iPhones and iPads.

I always kept track of what was happening in the Android market and at the same time I personally adopted Google’s cloud services for data storage and desktop apps like Google Docs. I became increasingly impressed with Google’s moves to provide a seamless user experience across a variety of devices, from desktop to tablet to phone. At the same time my frustration with iOS started to build, particularly with those devices we used at work. In an enterprise environment with an overbearing IT department the need to manage each device via individual iTunes accounts became a real PITA (that would be, pain-in-the-a**). It got real old real fast trying to educate new iPhone and iPad users on the very clumsy iTunes interface. It also got tiresome justifying time and again to our IT department why we had to spend an extra $100 per iPad just to get GPS capability. But we pressed on because at the time the apps we wanted to run – ESRI’s ArcGIS and Collector apps – either weren’t available for Android or ran much better on iOS devices.

A few years ago a co-worker brought in a Google Nexus 5 phone running Android 4.1 (Jellybean) and he let me play with it for a few hours. I quickly realized that Jellybean ain’t Gingerbread. I knew it was time to give Android another look. Soon after I picked up a Google Nexus 7 tablet and immediately got hooked on both the device and Android 4.x. Within 3 months I gave my iPad to my daughter and never looked back. Since this is a discussion about operating systems the only thing I’ll say about the Nexus 7 is that it is the best tablet I have ever used, period. I’m still upset that Google killed it off in favor of a larger form factor tablet and I’ll nurse my Nexus 7 along until the the last electron leaks from the battery and it can no longer take a charge. But as I found with the Samsung Player, good hardware isn’t worth much if the operating system is lousy. What pulled me towards the Nexus 7 was the much improved quality of the Jellybean operating system. While the earlier Gingerbread OS seemed to be one step removed from a hacker’s toy, Jellybean (despite the silly name) was a mature, well integrated OS. Even better, the GIS apps I wanted to run – ESRI’s ArcGIS and Collector – were now available in mature, stable versions for Android. 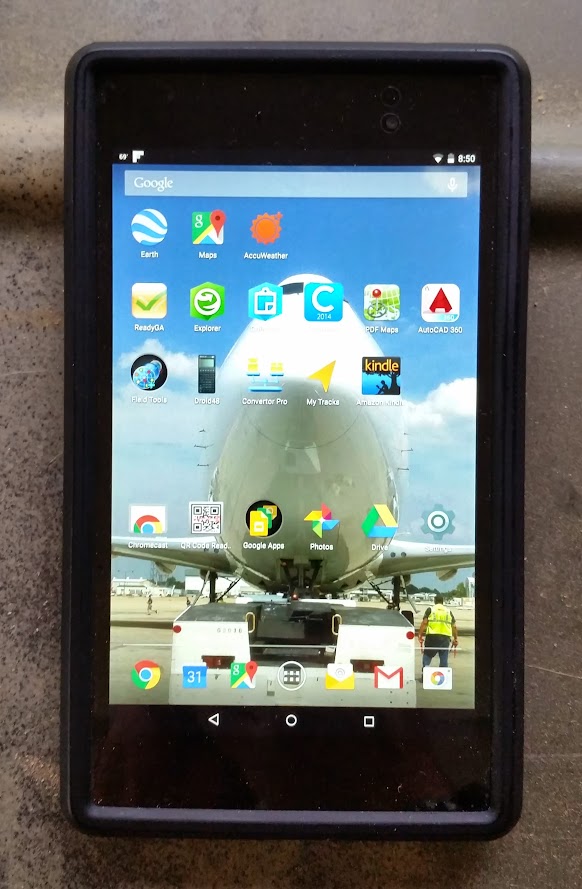 The Google Nexus 7 (2013 version), perhaps the best small tablet ever made. It makes an excellent field data collector – a large, crisp screen and lots of processing power yet still small enough to slip easily into a cargo pocket.

Shame on you Google for killing it off

While the Nexus 7 turned out to be great I still needed to test an Android smartphone to see if the operating system was ‘enterprise ready’. I talked to the telecom manager where I worked and convinced him to let me trade my company issue iPhone for a Samsung Galaxy S4. He thought I was nuts asking to trade a ‘presitge’ device like an iPhone for a pedestrian piece of hardware like the Galaxy S4. When I told him that I want to be able to recommend a GIS-ready device for the general workforce that is much cheaper than an iPhone (on Verizon’s corporate plan) he smiled. Keeping your telecom manager happy is always a good thing.

Testing soon revealed the good and bad of the Galaxy S4 and Android 4.4 as it’s implemented on the device. Overall the Galaxy S4 is a very good piece of hardware. Certainly it’s better than the iPhone 5 that I was evaluating it against – larger, brighter screen and a faster processor. The size is right. You get more screen real-estate but it’s not too big to use with one hand. But there were issues, both hardware and software related. 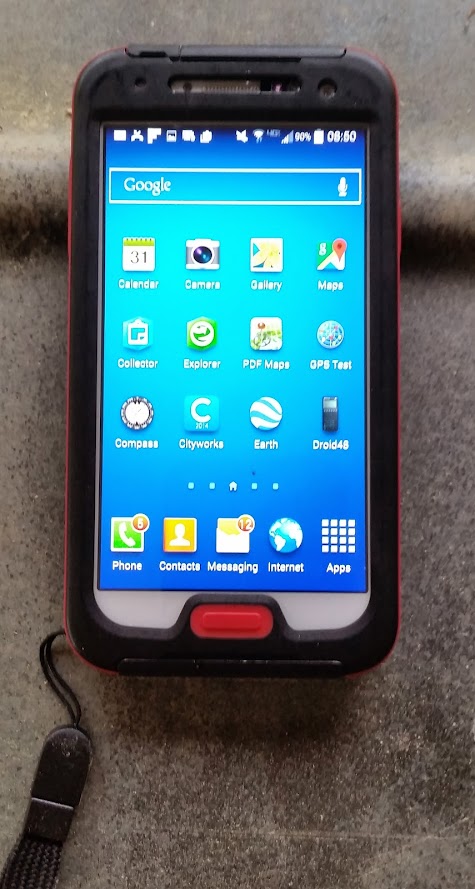 The Galaxy S4. Good hardware but inferior build quality considering it’s price and competition (the iPhone 5). This phone sits in a waterproof case made by Seidio – a great case that brings some badly needed field ruggedness to the phone and turns it into a viable all weather data collector

The hardware gripes fall into two categories – cheap build quality and limited system memory. Let’s talk build quality first. I’m sorry to say that the Samsung Galaxy phones just feel cheap. Plastic-y, flimsy, unserious. Coming from Apple’s iPhone products I was surprised at how cheap the Galaxy S4 feels in the hand. The single advantage the Galaxy build format has over the iPhone in this arena is the fact that the user can easily open the back of the Galaxy and replace the battery. If you are going to use the Galaxy S4 as a data collector you will need a good protective case (I use the waterproof case made by Seidio).

The next issue is memory. Samsung only sells Galaxy S4’s (and the newer S5’s) with 16 GB of system memory in the US market, and 16 GB has been far too small for several years. Samsung dismisses the complaints about this by saying that you can easily add a microSD card to bump up memory, but as we’ll see Android doesn’t always play well with ‘external’ memory beyond letting you store photos. And that’s how we’ve slow walked our way to this topic – for applications that have large data storage requirements like ESRI’s Collector app,16 GB of system storage ain’t gonna’ get it and Android won’t let you safely store data or image tiles on SD cards (without rooting the device, which no enterprise telecom manager will allow).

I first became aware of the issue after loading Nathan Mellor’s excellent Back Country Navigator (CritterMap Software). I had installed a 32 GB SD card in the Galaxy S4 and figured I’d be able to stuff all sorts of map cache data into it. Then I happened to catch Nathan’s long dissertation on why Android 4.4 won’t or can’t allow applications to access data folders on SD cards without all kinds of backflips and tricks and always with the lingering threat of data loss.

So what’s the practical impact here, if any? Well, Nathan has developed a work-around, that has Back Country Navigator (BCN) placing map cache data on the SD card in a directory that is tied to the BCN application. Android apparently requires this as a security measure, to keep rogue apps from messing with data associated with other apps. The problem with this arrangement is that while it works (and seems to work well), there is the serious risk that whenever you delete or just update the app the associated file system is also deleted (or renamed) and the data is gone. OK, this isn’t really a big issue with individuals managing their own devices, but if I’m an enterprise GIS program manager with perhaps dozens of Android devices to support with cached map or imagery data this Android limitation will get real cumbersome real fast.

In addition, ESRI requires storing map caches you create for use in Collector for ArcGIS in system memory on Android devices. On-device map caches are required if you want your workforce to be able to collect data while disconnected from wi-fi or a cellular data service. Unfortunately Collector will not work if you place the map cache on the SD card. This isn’t a limitation of Collector, it’s a limitation put in place by Android.

Of course these issues go away if you store all of your data in system memory, but with only 16 GB on the Galaxy S4 this is really not an option. System overhead gobbles up more than 10 GB of memory, and I can quickly fill up most of the remaining memory with one high resolution aerial imagery cache and a project database. That leaves no room for photos, PDF documents or any of the other stuff a GIS professional may want to park on his or her phone/data collector. In today’s world 16 GB of system memory is simply too measly, and Samsung should have known better when they introduced the S4.

The last issue gets back to the nature of the Android OS. Here I’m speaking as an Android end user and device manager, not as an Android developer or savant. First, Google needs to do a better job of policing the Android app ecosystem and put better security measures into their application development tools. People gripe about the restrictive nature of Apple’s iOS app development and approval environment, but you get far less ‘app crap’ on the iTunes App Store than you do on Google Play. Second, Google needs to build better external file management functionality into Android. Google keeps making noises about wanting to move Android out of the phone and tablet market and into a more robust desktop operating system. To do that, and move away from the app-centric design of Android, Google will need to build in robust file system management capabilities.

So is it back to the Apple ecosystem for me? No, I’m sticking with Android for the time being. I have a wider range of hardware to choose from, the operating system has matured nicely (storage issues aside) and the apps I want to run all work just fine on Android. I’m excited by some of the hardware products that have emerged in the Android world, like ruggedized smartphones and data collectors. Plus all of the mobile device development that interests me seems to be taking place in the Android world.

The Android universe will likely always lack the smooth polish and tight integration found in the Apple ecosystem, but for a tech geek that’s part of the fun. Today Android is polished enough to compete head-to-head with iOS, but still has enough rough edges and open doors to keep things interesting.

So what’s up next? How about the Samsung Galaxy S5 Active as a data collector? Stay tuned!