In 1942 George S. Patton was one of the fast rising stars in the US Army. In less than two years he had leapt from the rank of colonel to major general and went from commander of an armored brigade to commanding the 1st Armored Corps and the newly formed Desert Training Center in southern California (now known as Fort Irwin and the National Training Center). The 1938 – 1942 period was a time of explosive development and innovation in the US Army. War was on the horizon and our national leaders accepted the fact that America would be involved. There was a mad scramble to get our military the personnel, money and equipment needed to get ready for the inevitable. After almost two decades of neglect the US Army suddenly found itself flush with cash and manpower, and new equipment was coming on-line every day. Experienced officers who were innovative thinkers found themselves skyrocketing up the ranks as the new Chief of Staff of the Army, George C. Marshall rushed to fill the newly created command slots

Patton was a natural pick for Marshall. They were contemporaries and both had made a name for themselves during WWI. Patton had commanded the Army’s only armored forces during the war and was a full throated advocate for they type of fast moving mechanized warfare that would be needed on the battlefields of Europe. Between the wars Patton wrote extensively on mobile warfare for the Army’s professional journals and many of his ideas found their way into the Army’s doctrinal manuals. So in 1941 when General Marshall needed a tough, experienced officer to take over training for the Army’s newly formed armored forces he looked no further than George S. Patton.

Patton was given command of the 1st Armored Corps and told to find land suitable for training large mechanized forces. A Southern California native, Patton knew the large empty desert tracts east of Palm Springs was the perfect location. He established the Desert Training Center (now known as Fort Irwin and the National Training Center), moved his headquarters there and began the task of getting the Army’s armored units ready to beat the German army at their own game.

But what good is a highly trained, well equipped armored force if they don’t know where to go? Well, during this same 1939 – 1942 time period there was an effort going on with the Army Corps of Engineers and the Infantry School to standardize map production, adopt a new type of compass and develop innovative map reading and land navigation training programs for the entire Army. One of the results of this effort was the development of the M1938 lensatic compass. We know Patton was keenly interested in land navigation. He regularly used National Geographic and Michelin road maps during maneuvers and was often heard complaining about the shortage of standard military maps his armored forces needed to navigate across the battlefield.

The Army would have shipped the newly adopted M1938 compass to the Desert Training Center for testing and evaluation, and one of these compasses would have made it into Patton’s hands. Patton was a detail man and took a keen interest in everything his Soldiers were issued. He considered it part of his leadership responsibility to make sure a Soldier’s equipment worked. It makes perfect sense that Patton would have gotten his hands on one of these new compasses and put it through its paces.

Sometime in early 1942 a photographer asked General Patton to strike a pose doing something dramatic. I don’t know who’s idea it was to have him pull out his compass and shoot an azimuth to a distant point, but the resulting photo is interesting. Patton is standing beside his early M3 Stuart command tank and decked out in full battle regalia – tanker helmet and goggles, tanker jacket, binoculars, signature pistol at his side and an M1938 compass in his hands. 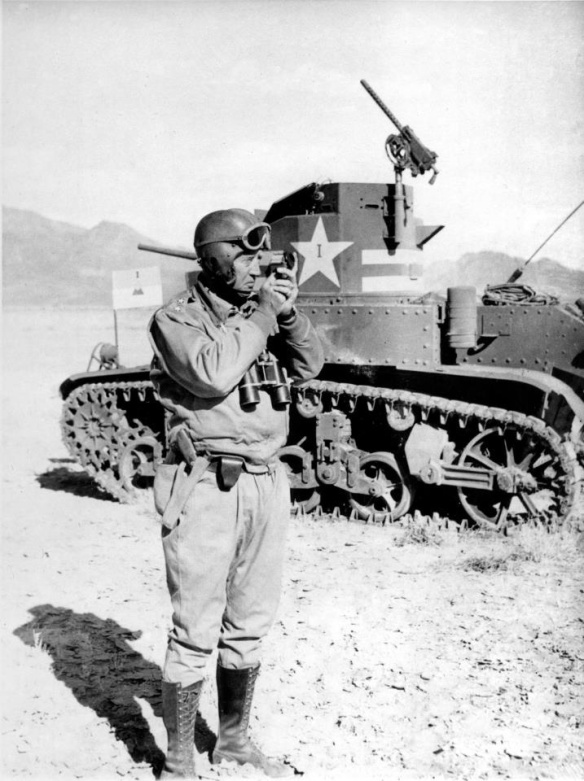 Just a few months after this photo was taken Patton would be pulled from his assignment as commander of the 1st Armored Corps and placed in command of the Western Task Force for the Allied invasion of North Africa. It’s at this point the common legend of General Patton begins, but we should always remember that he was instrumental in developing much of the Army’s early armored warfare doctrine and pushed hard for improved maps and map reading skills.