A few days ago my old friend Jim, unreconstructed Southerner (from South Jersey) and full-time VMI (Virginia Military Institute) alumni, let me know that there’s a new book out on VMI’s most well known professor, Thomas ‘Stonewall’ Jackson.  It’s titled ‘Rebel Yell: The Violence, Passion and Redemption of Stonewall Jackson’ by S. C. Gwynne.  Jim read an on-line review of the book and commented on how the article mentions Jackson’s keen ability to ‘read the battlefield’.

In previous blog posts I’ve discussed how great military tacticians and strategists have what seems like a God-given ability to read the ground. The ability to look at a particular battle space and know intuitively how forces will array either in the attack or the defense is the mark of a great battlefield commander.  Patton had that ability.  So did Napoleon, Robert E. Lee and Erwin Rommel. Stonewall Jackson was a master of the art, and perhaps one of the best operational-level commanders ever to take to the battlefield.  Jackson was like a mighty sword in Robert E. Lee’s right hand, and the best thing to happen to the Union Army was Jackson’s death on May 10th, 1863.  Had Jackson still been alive and in command of his Second Corps of the Army of Northern Virginia in July of 1863 Gettysburg would likely have turned out very differently.

As an operational commander Jackson realized he couldn’t take it all in from the saddle of his horse.  He understood that he needed good terrain intelligence in the form of accurate and detailed maps. Jackson was fortunate to gain the services of a talented topographer named Jedediah ‘Jed’ Hotchkiss.  Hotchkiss was a transplanted New Yorker who was running a school in the Shenadoah Valley when the Civil War broke out. He was also a self-taught topographer, geologist and engineer.  Hotchkiss offered his services to the Confederate Army and soon found himself serving on Jackson’s staff as his chief topographer and reaching the rank of Major.

Hotchkiss had a deep knowledge the Shenandoah Valley and used that knowledge to produce extremely detailed and comprehensive maps to support Jackson’s movements. But Hotckiss didn’t just make maps. Jackson so trusted his topographer’s knowledge of the ground and tactical abilities that he often had Hotchkiss lead columns to their objectives. Hotchkiss’ mapping and leadership skills quickly came to the attention of Robert E. Lee and copies of his maps were used extensively by Lee’s headquarters staff. In fact, it was Hotchkiss who reported the news of General Jackson’s wounding at Chancellorsville to Lee.  While Hotchkiss remained with the Second Corps staff until the end of the war he was often called upon by Lee to conduct specialized mapping and reconnaissance missions in support of larger Army of Northern Virginia operations.

At the war’s end Hotchkiss reputation was so well known that General Grant allowed him to keep possession of his maps. After the war Hotckiss’ maps were used extensively by the Federal Government when preparing the Official Record of the Civil War.

The Library of Congress acquired most of Hotchkiss’ map collection in 1948 and it is now one of the centerpieces of the Library’s Civil War map collection. In 1948 the Library published an excellent short biography of Hotckiss’ wartime mapping activities. His maps are true works of art and represent some of the finest battlefield cartography to emerge from the Civil War.

Enlarged section of a small scale (≈ 1:250,000) map showing the terrain between Harper’s Ferry and Martinsburg 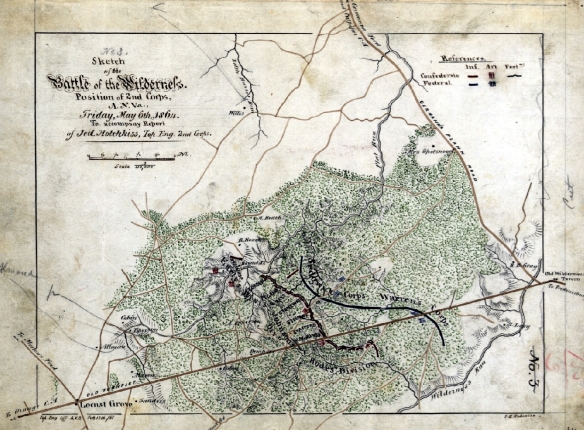 Detail from Hotchkiss’ notebook while working on maps showing positions of Second Corps engagements, 1864 – 65. This sketch was most likely done while on horseback and shows the incredible detail Hotchkiss put into his initial field sketches. Also note the place names with varying orientations, some appearing upside down. This is because the sketchbook would be rotated so the direction of travel is always ‘up’. Hotchkiss penciled in the place names so they appeared in the proper orientation based on his direction of travel while on horseback. When this field information was transferred to a larger compilation map the cartographers would place all place name data in the proper orientation

After the war Hotchkiss returned to his beloved Shenandoah Valley and continued his teaching and engineering professions. He became a successful businessman and an honored member of the Staunton, Virginia community. He died in Staunton in 1899. On his death his Civil War map collection was donated to the Handley Regional Library in Winchester, Virginia and in 1948 was moved to the Library of Congress.

The Geography and Map Division of the Library of Congress has made most of the Hotchkiss collection available for viewing on-line (just click this link). Spending some time on the site will give you an appreciation for the talent and contributions of this important wartime topographer.